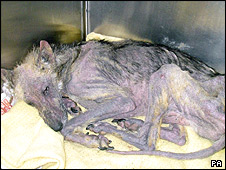 Hobo is being looked after at the PDSA Hospital in Northampton​
An abandoned German Shepherd dog was a "walking skeleton" when he was found, animal charity the RSPCA has revealed.

The RSPCA made an appeal for information after the dog, nicknamed Hobo by staff looking after him, was found in Little Billing, Northampton.

Hobo, who was found on 16 July, is believed to be between five and seven years old.

He had overgrown nails, was severely emaciated and had mange which caused him to lose almost all of his hair.

Hobo was found by a member of the public and taken to the PDSA Hospital in Northampton.

He is now receiving treatment and is eating and drinking well but will have to stay in hospital for at least a month.

Insp Claire Ryder, of the RSPCA, said she thought Hobo may not have been a stray for long as he would probably have been picked up before his condition worsened.

She said: "I have never seen such a mistreated dog, he really was like a walking skeleton.

"He must have been in agony for a long period of time.

"I shudder to think how someone could have been so callous as to let him get in this state.

"I urge anyone with information to come forward to help us find out where Hobo came from and how he came to be in such a terrible way."

Anyone with information is asked to contact the RSPCA.

That's terrible, I had a German Shepard and I couldn't tell what breed that dog was.

Munkey said:
That's terrible, I had a German Shepard and I couldn't tell what breed that dog was.
Click to expand...

Totally agree....Fookin Barstewards....We had to give our German Shepard away when I started working away and that hurt but to see this one - don't know how people can live with themselves
Just shown the missus and it reduced her to tears

my m8 has a german shepherd and they are great dogs, hope this one pulls through and gets a great loving home.

the person or persons who allowed him to get in that state need locking in a room and left with no food or water and no toilet shut the door and leave em to rot.

i hope that dog makes a full recovery will be nice to see pictures of him when he has recovered too.

the f*cking dirty b*st*rds i hope they catch the owners and lock em up hope hobo makes a full recovery :Chainsaw:

That is bad, what is wrong with these people ? thats just total disregard for an innocent animal, that sickens me, I won't say what I'd like to do with those responsible

Absolutely appalling, if i got my hands on them i would lock them up and starve them and see if they like it.

OMG...is that actually a German shepherd. Cruel bassa's whoever they are. I am not a dog owner but people that treat animals like that need a good effing hiding and then locked up.

a life is a life - put the owners in a room with some German shepherd attack dogs and let justice prevail!!!!!!!

I own a shepherd and he nearly died a couple of months ago due to a liver infection.They are the most loyal dog you will ever get.How anyone could do such a thing is beyond me

charlie senator said:
How anyone could do such a thing is beyond me
Click to expand...

it's the sick world we live in

I wouldn't waste my time making the effort not to feed the people responsible. Just line um up and shoot um.

Things like this make me ashamed to be human.

charlie senator said:
I own a shepherd and he nearly died a couple of months ago due to a liver infection
Click to expand...

Has he not got a flock to tend to lol :flock:


Seriously sick doing that to any animal, so much for man's best friend

They may be mans best friend but it clearly isn't vice versa, crap joke by the way !

I fell sick man, The people who did that to that dog need fucking shot.

I had 2 ped bull mastiffs a few year ago I paid £600 4 each of them when my misses fell preggy I putt a add in the paper gave them away to a good home for free a farm with kids and ripped the KC papers up.