Energy bills could go up by 40% 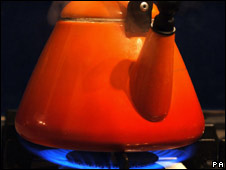 Household energy bills could increase by as much as 40% this winter, the BBC has learned, as oil and wholesale gas prices hit record highs.
The increases could mean households paying £400 more a year on average for their gas and electricity, senior industry sources have said.
The increase is far more than analysts have predicted in recent months.
It would put more pressure on homeowners already struggling with higher food and fuel costs.
Announcements are most likely to come in August, when energy bills are not at the forefront of people's minds, says BBC business correspondent Nils Blythe.
There is a great reluctance in the industry to be the first to reveal a big rise, so the rises may be unveiled in stages, our correspondent adds.
The prediction from senior sources in the energy industry is the highest yet. Some analysts forecast the increases will be nearer 25%.
'Massive effect'
The news comes on the same day that Chancellor Alistair Darling called for restraint in pay settlements to prevent the UK falling into an "inflationary spiral".

Wholesale gas prices have risen dramatically in the last 12 months

However, Dave Prentis, general secretary of the public sector union Unison, warned that a large rise in energy bills would have a "massive effect" on his workers and could lead to some pay negotiations being reopened.
"We reached a three-year agreement in health at Easter when the retail prices index [measure of inflation] was much lower than it is now," he said.
"If prices continue to spiral, that health agreement will be opened and if the government says we are not going to, then we will take industrial action," Mr Prentis said.
According to Capital Economics, a 40% jump in gas and electricity bills would add 1% to the Retail Prices Index measure of inflation, which currently stands at 4.3%.
Wholesale rises
Last month, Centrica - which owns the UK's biggest energy provider, British Gas - signalled that gas prices for customers could increase again in 2008, as it was being squeezed by rising wholesale prices.
According to industry watchers Platts, the wholesale price of gas has risen 74% since the start of the year, with gas to be supplied in winter 2008 hitting a record high last week.
The wholesale gas price is closely linked to the price of oil, which itself hit a record high of just under $140 a barrel this month. In January, a barrel of oil cost $100.