Yobs throw rocks from bridge on to M1 vehicles 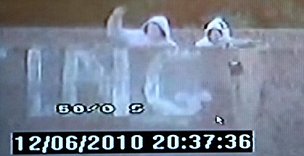 He and two other yobs launched a number of missiles at cars, vans and lorries barrelling along the M1, smashing the windscreen of a Post Office lorry.

Glass shattered into the driver’s eye but fortunately has not left him with any permanent disability.

Police say the trio, captured on CCTV, were aged between 13 and 15, all wearing hoodies. The incident was one of eight recent occasions where rocks or stones were thrown from bridges over the motorway.

The latest one occurred on June 12 at about 8.40pm near the Luton Rugby Club at Slip End Road, Bedfordshire.

PC Charlie Pirie said: ‘It goes without saying how dangerous these incidents are. There has been expensive damage caused to the vehicles involved and three drivers have needed medical treatments for glass fragments in the eye, but fortunately none of the injuries have been serious.

‘However, it doesn’t take much to imagine what could have happened if one of these heavy goods vehicle drivers had lost control of his lorry.’

In one incident, an ambulance windscreen was smashed at one of the Luton motorway bridges.

This was one of five cases reported in a half hour period between 7.40pm and 8.15pm on June 8.

Detectives are trawling through other incidents that may be linked, including two lorry drivers who were targeted on May 19. Again, one reported getting glass in his eye.


Yobs throw rocks from bridge on to M1 vehicles | Metro.co.uk

What on earth is going through their low life scum brains

dont do it it"ll hurt

Location
in a house

dont do it it"ll hurt said:
it is the mentality of the younger ( not all ) generation and the pc brigade always say they are misguided or it's the parents fault
bring back the birch now is my say
Click to expand...

Totally agree, but make it a public birching for the offenders and the parents / guardians.

The reason we do not do this kind of thing should be the consequences but they no longer seem to care about that, so make it shame. I can guarantee they would not like to be seen bare assed and getting caned.

Isn't this attempted murder? It'd be difficult to argue that as a result of their actions they thought nobody would be killed or seriously hurt.
S

i would class this sort off act as attempted murder,as they are fully aware of what they are doing,driving on motorway's and concenrating is hard enough,don't need to be thinking that something is going to hit your windscreen...

Thats the mentality of the youth of today but if it was someone doing it to there parents it would be wrong.

I'd throw them little f*ckers of the bridge onto the hard shoulder, typical scum of today.