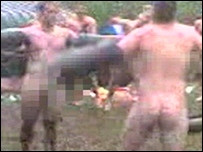 Marines fighting in footage obtained by the News of the World

A film apparently showing a Royal Marine being beaten unconscious has been widely condemned.
The footage obtained by the News of the World appears to show two naked men being forced to fight each other.
One of the men is then kicked in the face, allegedly by one of his superiors in 42 Commando.
Ex-Commander of UK forces in Bosnia, Col Bob Stewart, said it "shocked him to the core". The Ministry of Defence said bullying would not be tolerated.
It said it was "very far from an official training exercise" and that it was trying to establish what lay "behind" the video.

Why are they naked, for goodness' sake?

The newspaper said the footage had been filmed covertly by another marine at 42 Commando's base at Bickleigh Barracks, near Plymouth in May.

A former Commander of British forces in Bosnia, Colonel Bob Stewart, said the footage had shocked him and that it would appal 42 Commando.
"It is some form of initiation ceremony. It is clearly booze-fuelled," he said.
"It is absolutely wrong and horrific, simply because this is not what our soldiers should be undergoing."
"Why are they naked, for goodness' sake?"
'Damaging' episode
A former Liberal Democrat MP and ex-Marine said the episode was "repugnant to generations of Royal Marines".
John Burnett, ex-MP for Torridge and West Devon, said the corps was "dependent on mutual respect and encouragement and teamwork".


The Conservative party's spokesman for homeland security Patrick Mercer said he had come across this sort of thing occasionally during his 26 years in the Army.
"I can't tell you how damaging it is," he said.
"Just imagine a young man turning up in his unit and being made to wrestle naked in a field while his non-commissioned officers are dressed up in women's frillies. I mean, it's not very dignified stuff, is it?"
Naked ritual
Twelve soldiers who had just finished their 32-week commando training were alleged to have taken part in the initiation ritual, while around 40 other marines - also stripped naked - watched.
The fight appears to have been "directed" by two non-commissioned officers. One was dressed in a surgeon's outfit, the other dressed as a schoolgirl.
The marine who filmed the alleged fight told the newspaper the ritual had been more than drunken antics and that the protagonists were forced to fight in a humiliating manner.
The images show two naked men in the centre of a large group. At first the pair appear to fight with large mats rolled round their arms.
But then a man dressed in a blue surgeon-style outfit motions for them to use bare fists.
When one of the soldiers complains, the man appears to kick him in the face, allegedly leaving him unconscious on the grass.
'Taken seriously'
The MoD has appointed the Royal Military Police to carry out an investigation.
An MoD spokesman said: "The Royal Marines take these allegations extremely seriously and have a zero-tolerance policy on bullying and harassment."
He would not comment on the detail of the allegations because of the ongoing investigation, but added: "Bullying and harassment is not widespread within the Armed Forces.
"Behaviour of this kind will not be tolerated and every effort is made to apply this policy rigorously."

Assault at centre
But he added that strenuous efforts were being made in the Armed Forces to prevent such things from happening. The BBC's defence correspondent Paul Wood said although the MoD had not commented about the nature of its investigation, the criminal aspect of it centred on whether the man shown to be knocked unconscious in the video was assaulted.
You must log in or register to reply here.
Share:
Facebook Twitter Reddit Pinterest Tumblr WhatsApp Email Share Link
TEST
Top