Fans wanting to get the best out of the King Kong video game should avoid the version for Microsoft's new Xbox 360, the game's maker Ubisoft has suggested. 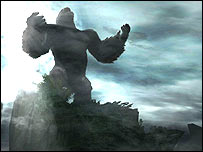 Ubisoft boss Yves Guillemot admitted that the 360 game is too dark on standard TVs, making it hard to play.

"I'm a bit disappointed that we didn't see it when we were developing the game," he told the BBC News website.

The game of the Hollywood blockbuster has received generally positive reviews and sold well in the UK.

Ubisoft's team worked closely with King Kong film director Peter Jackson, and the game has been praised for recreating the cinematic experience of the film.

As with many big blockbuster games, Ubisoft made multiple versions in order to sell as many copies as possible.

Versions for the PlayStation 2, Xbox, GameCube and PC hit the shops in the UK in mid-November to favourable reviews.

When you play on an Xbox or a PlayStation 2, you start to see that it is beautiful

The Xbox 360 edition went on sale at the beginning of December.

Kong is currently at number four in the official all formats games charts, with the 360 version accounting for 12% of sales.

Players will have expected, at the very least, that Skull Island would look better than on other consoles, taking advantage of the better graphical and processing abilities of the 360.

But Ubisoft has warned that the opposite may be the case.

"We have a problem on the 360," said Mr Guillemot. "The screen is dark on some TVs and it totally changes the experience. When it's dark, you don't see where you have to go."

The Ubisoft boss said the team who made the game used certain settings on high-definition TV screens.

It did not occur to them that there would be a problem with standard televisions, which are what most people use to play console games.

Other 360 games, like Microsoft's Perfect Dark Zero, offer an option to select what type of TV is being used.

"We are looking to see if we can fix the code," said Mr Guillemot.

"It is the beginning of the high-definition TV era for us. It's a shame, but it happens with new machines. I don't think we will have it anymore."

He recommended that fans of the movie stick to the version for more established games consoles.