Former champion boxer Frank Bruno has told a Sunday newspaper that he used cocaine for six months, plunging him into a "black hole with no ending". 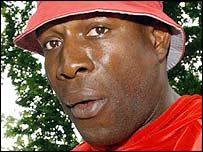 He said the drug, which he first took in 2000, may have contributed to the mental illness for which in 2003 he was sectioned under the Mental Health Act.

"Cocaine took control of my brain. I wish I'd never seen the stuff," the 43-year-old told the News of the World.

A year later he lost his title to Mike Tyson and was then forced into retirement by an eye injury.

He was divorced from wife Laura, the mother of his three children, in 2001.

An interview with Bruno and extracts from his autobiography are published in the News of the World.

He said he first took cocaine after being given some by fellow English visitors to Las Vegas, where he had watched a fight.

"It was like nothing I'd ever taken before. I did it again. And again. It was nice - too nice," he said.

But he added: "It's a horrible, very, very false world that it puts you under. I felt great when actually things weren't so great.

"I loved the buzz it gave me but I couldn't stand coming down."

Bruno told the paper: "Taking it was the worst thing I could have done in my mental condition - it was like a black hole with no ending."

Cocaine "scared" him and he "had to walk away" after just six months, he said.

He soon afterwards tried high-strength "skunk" cannabis, as "a way to escape".

"Down as I was, I knew it was a dumb move. I stopped almost as soon as I started. But stopping didn't make me feel any better," he said.

In 2003, Bruno received psychiatric treatment at Goodmayes Hospital in Ilford, Essex, after being detained under the Mental Health Act at his home near Brentwood.

Bruno also admitted using cannabis to "calm himself down" after fights, having first tried the drug at the age of 12.

"Using drugs is not a nice experience. I'm talking about it now because I think it's better that I come clean."

Bruno lifted the WBC boxing title when he outpointed Oliver McCall in September 1995.

At the height of his fame, he was one of Britain's most popular sportsmen, also making regular TV appearances and starring in panto.

No sympthy at all, Send the pratt a case of Pepsi round to his house and see if he can tell the differance, all the time we get so called famous peolple coming out saying i took drugd please forgive me it ruined my life they had it all and they chose to stuff charlie up there nose you walk along any street in the UK and you will see people who have nothing and no one cares these Pr*cks get paid to come out with this sh*t,And this has nothing to do with a hangover..........

he made a mistake, and paid for it, happens all the time.

kabzy mabzy said:
he made a mistake, and paid for it, happens all the time.
Click to expand...

How has he paid for it by going on the front page of a National newspaper and getting money from them poor wee sod lets have a whip round for him, Why not come out and promote some anti drug campaign.