A UK couple on holiday in Portugal had their young children temporarily taken into protective custody after they collapsed drunk, officials have said.

Staff at the Aparthotel Mourabel, in Vilamoura on the Algarve called police after they passed out on Friday night.

The children aged one, two and six were taken to a children's home in Faro while their parents were treated at a health centre in Loule.

The couple did not comment, but the home's director called it "shocking".

Dr Luis Villas-Boas said: "It is the first time it has happened in my 22 years working at this home.

"It's normal for a couple for one to drink while the other doesn't drink. The problem here is they were both passed out.

"It was extreme neglect and abandonment. I hope somebody carries this information to the UK so these parents can at least be seen because these children are indeed at risk."

He said his children's home was called shortly after midnight and asked to provide emergency shelter for the youngsters. 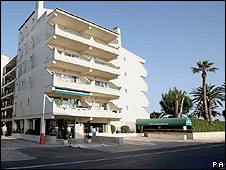 The couple, from Northern Ireland, were staying in this hotel​

The couple, who have not been named, are thought to be from Northern Ireland.

On Friday afternoon they arrived with their children at the Aparthotel Mourabel in Vilamoura for a one-week holiday.

The hotel manager said the couple and their three children went out for dinner nearby at about 2000 local time on Friday.

Upon their arrival back at the hotel about two hours later the father passed out on the sofa in reception and could not be woken, he said.

The manager said the mother of the children had tried to return to the apartment with the children, but was "struggling with the pushchair, swaying around from side to side".

The hotel manager said: "The six-year-old boy was pushing the other buggy with the two-year-old girl in it.

"We put her and the children inside the bar. She was sitting on a chair and she fell asleep and never woke up.

"We tried to wake her, we tried to put some water on her face and head to wake her but she was very, very bad. She started to be sick every minute."

A spokesman for the local police said they were contacted by hotel staff at 2200 local time because "the children were crying and they could not revive the parents, who were both out cold".

He said: "We arrived to assess the situation and called the INEM (Portugal's national medical emergency service) as the parents were unconscious, and they were taken to hospital.

The incident occurred on the eve of the first anniversary of the disappearance of Madeleine McCann, who went missing from her family's holiday flat in the Algarve while her parents dined nearby.

No wonder we have a bad Rep abroad.

We all like a drink now and again and especially on holiday but never in my puff have I ever even been tipsy when in charge of my kids. If I have a right few drinks then my wife will be stone cold sober and vice versa.

Bloody idiots they are.
B

Worse than idiots, people like that dont deserve to keep children, ffs one stay sober is that too much to ask.

Being pi$$ed out of your head is way over the top, I must admit both me and my partner have a drink and then come home to the kids but one of us stays moderate, well within sensible limits. (Or should I say the other half does, lol.)

But both of you passing out while in charge of children is insane.
E