Former Bay City Rollers star Les McKeown has been fined £1,000 and given an 18-month ban for crashing his car while twice over the alcohol limit. 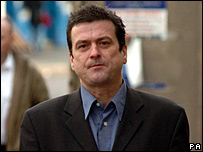 The singer was castigated by a judge at Thames Magistrates' Court for his "atrocious" behaviour after swerving into traffic in north London last year.

He not only fled the scene but changed pleas three times, finally admitting to drink-driving and having no insurance.

McKeown, 50, of Lower Clapton, east London, apologised for the offence.

He described the collision in July 2004 as a "terrible mistake".

The court had heard the singer swerved, causing another vehicle to drive into his side, leaving McKeown's Volvo stuck on a traffic island.

Then, as he fled the scene he threatened passers by who tried to get him to wait for the police, according to witnesses.

McKeown, of Goulton Road, Lower Clapton, shot to fame in the 1970s with his group's hits such as Bye Bye Baby and Shang-a-Lang.

His counsel, Stuart Biggs, told the court his client was a man whose funds had effectively run out, mainly because of his lifestyle.