The sensual world of Kate Bush

The sensual world of Kate Bush 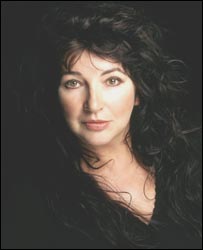 Singer-songwriter Kate Bush is about to release her first album in 12 years, Aerial. She remains one of UK music's most important -and influential - female artists.
In 1978, with British music still reeling from punk, a doctor's daughter from the south London suburb of Bexleyheath released her debut single Wuthering Heights, a song inspired by the Emily Bronte novel.
The eerie song could have been derided as an out-of-date progressive oddity. But Wuthering Heights was a haunting treasure.
Few could believe a 19-year-old had penned it.
But this odd song topped the charts and a British musical legend was born.
Bush's first album, The Kick Inside, was recorded soon after Wuthering Heights' success and sold more than a million copies when it was released.
Both her debut and the follow-up album Lionheart, released the same year, featured songs Bush had written in her early teens, including The Man with the Child in His Eyes.
Allowed time
Bush had been discovered by a friend of the family, Ricky Hopper, and a demo recorded when she was only 15 made its way to Pink Floyd guitarist David Gilmour when she was 16.
He insisted she be signed to EMI. 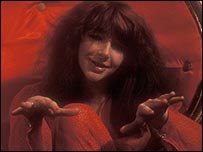 Bush drew upon mime and modern dance for her live shows

In stark contrast to the hot-housing approach of record companies in 2005, EMI insisted she be allowed to develop at her own pace. As part of the process she studied mime and dance as well as singing.
She released five albums by 1985, the last of which, Hounds of Love, is cited as an influence by other artists such as PJ Harvey, Alanis Morissette, Tori Amos and even 21st Century rock bands such as the Futureheads.
Her last album, The Red Shoes, was the first to debut in the US Top 30 in 1993.
Since then, her career has not so much waned, as been turned off at will.
Bush remains one of the music industry's most reclusive artists. She has toured only once, in 1979.
Embraces motherhood
She now records mostly at her home studio in Berkshire and prefers to lead a quiet, family-orientated life.
"I suppose I do think I go out of my way to be a very normal person and I just find it frustrating that people think that I'm some kind of weirdo reclusive that never comes out into the world," she told an interviewer recently. 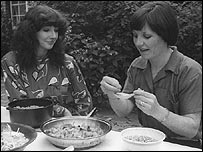 
In 1998, she became a mother for the first time at the age of 41, giving birth to a son, Bertie, who is apparently a major influence on the new record.
Music Week's A&R editor Stuart Clarke said Bush remains a major figure in the British music industry.
"It's not like some artists who have a 12-year break and people forget about them. This is more than a break. There is this mystery and fascination there about what she has been doing," he said.
Remains elusive
Mr Clarke added that Bush's "fanatical" fanbase is another part of the equation.
"In many ways she seems closer to them than she does to the music business or her manager," he explained.
BBC 6 Music reporter Mark Sutherland said: "Even after more than 20 years we really don't know much about her. 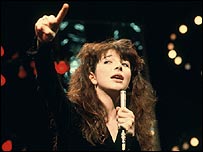 
"She is pretty much the only artist who could go 12 years between a record and people would still be interested.
"You're guaranteed to hear something incredibly interesting."
Sutherland said part of the delay in releasing music may be because she is a perfectionist - and with her own studio to record in, she can work to her own timetable.
Major influence
"I get the feeling that making records isn't something she necessarily wants to do, but has to do."
New artists continue to state her importance.
"At the Mercury Prize, pretty much the first thing the winner Antony of Antony and the Johnsons said was the first artist he obsessed about was Kate Bush," Mr Sutherland said.
"She attracted people who were different. Before Kate Bush, these people couldn't imagine being on Top of the Pops. "After seeing her, they realised they could make music themselves."