A new Army Captain was assigned to an outfit in a remote post in the Afghan Desert ...

During his first inspection of the outfit, he noticed a camel hitched up behind the mess
tent.

He asked the Sergeant why the camel was kept there.

The nervous sergeant said, 'Sir, as you know, there are 250 men here on the post
and no women. Sometimes the men have urges. That's why we have Molly The Camel.

The Captain said, 'I can't say that I condone this, but I can understand about the 'urges',
so the camel can stay.'

About a month later, the Captain starts having his own 'urges'.

Crazed with passion, he asked the Sergeant to bring the camel to his tent.

Putting a ladder behind the camel, the Captain stands on the ladder, pulls his pants
down and has wild and insane sex with the camel.

When he's done, he asked the Sergeant, 'Is that how the men do it?'

'No sir. They usually just ride the camel into town. That's where the girls are." 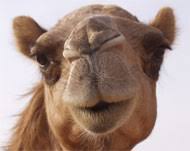 Its a tough job but somebody has to do it? .Right who is next?