Short snippets of the Chronicles of Narnia have been shown to a handful of film critics in the UK, giving a taste of what to expect when the movie is released on 8 December.


Such is the complexity of the film-making involved in making The Lion, the Witch and the Wardrobe, the first in a series of seven planned films, that the finishing touches to the special effects are still being added just weeks before it officially opens. 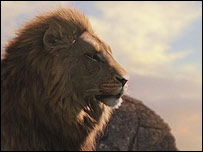 The lion Aslan returns to Narnia to save his people

The Lion, the Witch and the Wardrobe opens with the Pevensie children being evacuated to the country during the war, arriving at a large house lived in by an eccentric professor.

Then the horror of real life blends with fantasy as the four children enter the magical world of Narnia.

The 10-minute teaser trailer was preceded by extracts of what will probably become the DVD extras, with the cast and crew involved in the making of the film giving an insight into the challenges they faced.

These included creating the vast snowy landscapes which was tackled by mixing scenes using fake snow, to allow the children to act without freezing, and real snow-covered vistas achieved when the entire set moved to the Czech Republic.

They also had to set up what amounted to a small village in the mountains of New Zealand.

What is clear is that Narnia has a similar feel to The Lord of the Rings, particularly in the fighting scenes and the myriad creatures and monsters which inhabit Narnia.

Both movies were filmed in New Zealand, using similar breathtaking scenery, and employed the expertise of the same special effects company, Weta Digital.

One of trickiest aspects of the film was making the lion Aslan both heroic and loveable. 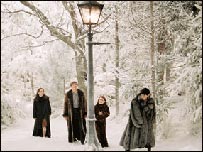 The snow scenes used a mixture of fake and real snow


Created entirely by computer graphics, Aslan has the air of a real animal, but is nothing like the wizened lions seen on documentaries, with matted fur and battle scars.

Narnia film-maker Andrew Adamson directed Shrek and Shrek 2, winning the inaugural Oscar for an animated feature for the original in 2001.

Because Narnia is a mixture of live action and CGI it was not too much of a leap to move to another genre, he has said.

Adamson said he hoped that like Shrek, Narnia would work on multiple levels with both children and adults enjoying it and personally relating to different parts of it.

Children will particularly enjoy the characters of Mr Tumnus and Mr and Mrs Beaver.

Tilda Swinton is the perfect evil White Witch, with costume designers and make-up artists actually making her appear near-frozen in some scenes. 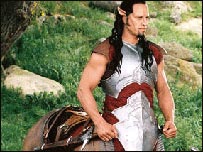 The centaurs, allies of Aslan, are a mixture of real actor and CGI

Producers will have had to work hard to try and make Narnia appeal to adult audiences.
While The Lord of the Rings is a book enjoyed by both children and adults, the Chronicles of Narnia remain largely the preserve of younger readers.

Similarly, the Harry Potter books are published in children and adult versions. But Narnia looks like it will manage to be a film for all the family, and with six more films planned it could become a film franchise that will be talked about for many years to come.