Plastic bags to be put over Birmingham 'terror cameras'

Plastic bags to be put over Birmingham 'terror cameras' 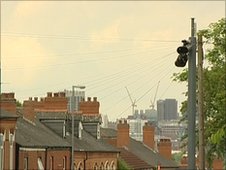 A consultation will be held over the use of the cameras Bags are to be put over scores of surveillance cameras in parts of Birmingham with large Muslim populations, after local objections.
Safer Birmingham Partnerships (SBP) said 216 cameras were put up including covert ones, mainly in the Washwood Heath and Sparkbrook districts.
The cameras were financed through a counter-terrorism fund, but the SBP said they would tackle all crime.
Councillor Salma Yaqoob said people had lost faith in the authorities.
'Sneaky handling' The Respect Party councillor for Sparkbrook said: "In terms of reassurance it's going to take a lot more than plastic bags.
"The residents have lost faith with the authorities for their sneaky handling of the way they went about this and will not be reassured until they have been told the locations of the hidden cameras too."
SBP said 72 cameras had been placed covertly and would not be covered by the plastic bags.
It said 106 cameras were Automatic Number Plate Recognition devices that were purely trained on car registration plates at road level.
Continue reading the main story
If that's what the police have now decided to do, I applaud them for doing so
​
Roger Godsiff MP
SBP said 38 overt CCTV cameras had been installed as well, but none of the cameras would be used until after the consultation had been carried out.
The cameras were financed through the Association of Chief Police Officers' (Acpo) Terrorism and Allied Matters (TAM).
'General crime' In a statement in April, the SBP said it had received £3m from the Home Office to improve community safety and crime reduction in the Washwood Heath and Sparkbrook wards.
"Although the counter terrorism unit was responsible for identifying and securing central government funds and have overseen the technical aspects of the installation, the camera sites were chosen on the basis of general crime data - not just counter-terrorism intelligence," the SBP said on Thursday.
The SBP - a partnership of the police, the city council and other agencies - said a number of concerns had been raised and it wanted to give people the right to express their views.
Roger Godsiff, Labour MP for Hall Green, said: "I put down an early day motion in the House of Commons expressing my concern about the way it had been handled and saying that there should be proper public consultation before the cameras are activated.
"If that's what the police have now decided to do, I applaud them for doing so."

Location
playing poker in the vip room cos am hooked

cant see wot the fuss is about. if you arent doing nothing wrong why worry about them .

What a terrible thing to do put up anti terrorism cameras in a Muslim area, whatever next.

Don't want to upset the cnuts now do we

Looks like the main objection is to the covert camera's, why are they covering the visable ones but not the covert ones which are the cause of the issue.

Also I can see how police are using cameras INSTEAD of have officers on the street, not in addition too. Don't know who is funding the cameras but maybe the money could be better spent in other ways of law enforcement.

if youre doing nothing wrong, then whats the problem??

im all for cctv on every corner of every street, while it may not stop all crime, it would make finding those guilty of it much easier

unless the community in that area as a whole has something to hide?

I thought that Big Brother had been watching for years ......

Don't see any problem with cameras, as i said i thought they were everywhere already. There's enough fly on the wall tv documentaries showing cctv footage anyway!

emarald said:
What a terrible thing to do put up anti terrorism cameras in a Muslim area, whatever next.

Don't want to upset the cnuts now do we
Click to expand...

Apparently, calling all Muslims qunts is fair game on here?

It depends who you are.

i think its more of a figure of speech to be honest, but hey i`m from the north, we call everyone cnuts.


dont be so touchy.


anyway, we have cameras in all areas of england, not JUST muslim areas, whats the problem, and as for covert cameras, what the fooks it got to do with anyone where they put them, as far as i know in essence the security services are there to protect the law abiding citizens of this cuntry, no matter what area they are in. Doesnt really have a leg to stand on to be honest, but no doubt they will pander again......


and can i just ask, who is putting the bags over the cameras? the community or the council? because for damn sure if i was seen shimmying up a lamp post in my area to put a bag over a cctv camera i`d be arrested.
Last edited: Jun 17, 2010

Location
'It was an open secret' - Bill McNeil

A don't like the idea of camera's all over the place and its nothing to do with nothing to hide it just makes me feel like living in an open prison.
Camera's don't deter crime and only solve the crime after its committed,,would more bobbys on the beat not be a better idea or tougher sentences where crooks actually do real time in a jail and not a holiday camp.?
Nope,,lets treat us all like criminals and accept "that if you have nothing to hide then you have nothing to worry about".

A wonder how many camera's are planted outside MP's houses?

A couldn't give a monkeys if its Muslims, Martians or OAP's bagging camera's,,good on them..

It was a figure of speech, but not wanting to offend you I will repost.

What a terrible thing to do put up anti terrorism cameras in a Muslim area, whatever next.

Don't want to upset the intercorsing vingina's now do we

emarald said:
Don't want to upset the intercorsing vingina's now do we
Click to expand...

If this is a predominately Muslim area, maybe their wee burka's their putting on the cameras?

Well I presume "intercorsing vingina's" is emarald's hopelessly misspelt and and redundantly punctuated attempt at describing muslims as "f***ing c**ts".

This as we know is well within DW's rules and has been thanked by three members so far.

This as we know is well within DW's rules and has been thanked by three members so far.
Click to expand...

your quite right, however its only one word he has mispelt, the term `intercorse` would be i think the american spelling off the word. Typical americans eh, taking the U out of fooking

but i actually thought he meant `[email protected]` but there you go.

TheCheekyMonkey said:
your quite right, however its only one word he has mispelt, the term `intercorse` would be i think the american spelling off the word.
Click to expand...


...but let's not get too picky. The intent is more important.


...but let's not get too picky. The intent is more important.
Click to expand...

does that mean we can put the U back in it then? :Clap:

I meant the posts, not the negative rep emarald.