Curtis "50 Cent" Jackson stars in the controversial film
Hip-hop star 50 Cent has said he is "saddened" after a fatal shooting at a Pennsylvania cinema where his film Get Rich Or Die Tryin' was screening. 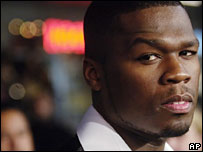 Sheldon Flowers, 30, was shot three times at the Loews Cineplex at West Homestead, near Pittsburgh, after an argument broke out between four people.

Police said Mr Flowers, who died in hospital, was carrying an unregistered gun without a permit.

The film - based on 50 Cent's life - has caused controversy in the US.

The rapper - whose real name is Curtis Jackson - has been shot nine times, spent time in prison and dealt drugs.

He told US network ABC: "I feel for the victim's family in this situation.

"But, you know, these weren't kids. This was a 30-year-old man who had a dispute with three other guys."

Police said Mr Flowers - who had just been to see the film - and one other person had fired the shots, but they had no suspects. The row began in the toilet, before spilling out into the lobby. It is not known what film the three men had seen.

50 Cent billboard
Posters for the film have already caused controversy
Loews said the cinema would stop showing Get Rich Or Die Tryin' while the investigation continued.

In California, billboards promoting the movie were removed from areas near Los Angeles schools after community leaders claimed it glorified violence.

In Ohio, another cinema chain, National Amusements, stopped midnight screenings in a neighbourhood of Toledo, where rioting occurred last month after a neo-Nazi group visited the city.

Police raised concerns that the film could lead to more unrest.