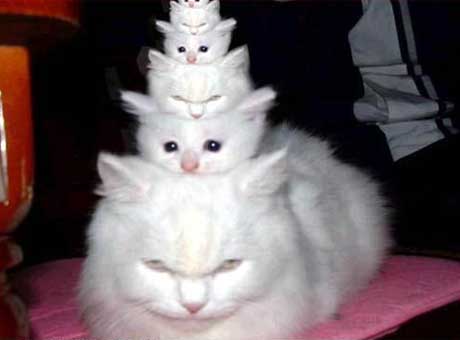 Millions of people now spend their time on teh interweb (sic) looking at pictures of cute little kittens decorated with captions written in misspelled baby-talk. The language of Shakespeare and Milton has been reduced to IM IN UR BRIEFCASE PEEIN ON UR MEMOZ.

Still, I Can Has Cheezburger? – ICHC, for short – has become astonishingly successful in a remarkably short time. It was founded in January 2007, when Eric Nakagawa and Kari Unebasami posted a picture of a cat with the caption "I Can Has Cheezburger?" – hence the name. According to chief executive Ben Huh, the site now gets about two million page views and 8,000 submissions per day. All the content is generated by users in the true Web 2.0 way.

The site has just won two "people's choice" Webby Awards, made the Technorati Top 10 blogs, and been featured in dozens of publications including The Wall Street Journal, The New York Times, Business Week and The Guardian. Although it is not the original source of lolcats (from Laughs Out Loud in netspeak), it has become the poster child for the cute revolution.

ICHC is often written in lolspeak, which blogger Anil Dash has dubbed "Kitty Pidgin". It's a liberating dialect because nobody has to worry about getting it wrong. In fact, getting words "wrong" is almost obligatory, though some young people already appear to write it more fluently than English. (Mai hed hurtz.) There's a Definitive Lolcats Glossary for people who care.

And it's not all silly. For example, the thought experiment known as Schrödinger's cat is a running gag – a picture of two cats in separate cardboard boxes was captioned: "Schrodinger improves accuracy wif increased sample size". There are also geeky jokes about Microsoft Windows, and some biting satire. Although ICHC has a 60% female readership, the site says: "Our male demographic has a heavy mix of technology workers."

If you don't like a caption, you can try to do better. Click on Lolbuilder and you can pick from a wide range of pictures sorted into cats, dogs, other animals, news and objects. If you can't find one you like, you can upload your own.

Next, add your lolspeak comment. The site provides three boxes that add text to the top, middle and bottom of the picture respectively. You can preview the image, and change the type until you like the result. You don't have to provide a name or email address. If you don't, your submission will be credited to "dunno source".

Many people contribute by leaving comments and by voting for things they like. One picture on the front page ("Basement cat sends his minions thru ur drain") currently has 543 comments and 2,488 votes. Very few blogs attract that level of participation.
Will ICHC last another 16 months or will it go the way of Dancing Hampsters (sic), I Kiss You!!!! and AmIHotOrNot? I expect it to last. ICHC is more than a collection of amusing pictures: it has become a community.

Is this the end of the world as we know it?

nara said:
Is this the end of the world as we know it?
Click to expand...