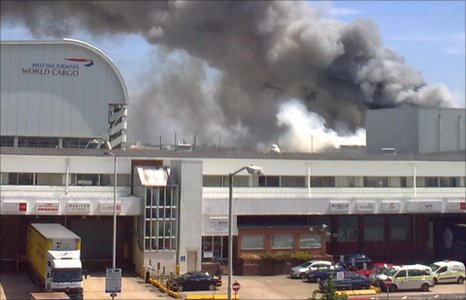 A large plume of smoke is rising from a Heathrow cargo depot (Picture by Matthew Bennett)
​
About 100 firefighters are tackling a fire at a cargo area at Heathrow.

It is thought a forklift truck caught fire at the Servisair Warehouse and a building is now alight at the west London airport.

No-one is believed to have been hurt but witnesses reported a small number of explosions, probably from gas cylinders on the vehicle.

London Fire Brigade (LFB) was called at 1315 BST. Some 20 fire engines are at the scene.

More than 200 people have been evacuated from the area.

The cargo area has been cordoned off but the airfield remains open. Roads in the area have now re-opened.

A spokesperson for Heathrow Airport said "operations were unaffected" but they would be monitoring the situation.

Lee Parker, 25, was delivering a package to the cargo area when the fire started.

He said: "I had got out of my vehicle and was standing pretty close when I heard a loud bang then smoke started coming out of nowhere.

"There were soon police everywhere, including helicopters, and we were all moved from the area.

"I'm about a mile away now and I can see lots of black smoke and it's heading towards the runway.

"Police have cordoned off the area in a large circle and there are people just stood about as they have been evacuated from all the buildings." 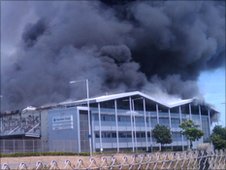 Firefighters describe the incident as 'sizeable' (Picture by Satpal Sidhu)
​
Firefighters were sent from stations near Heathrow to supplement the small force based at the airport.

An LFB spokesman said it was a "sizeable" fire in a warehouse within the airport perimeter.

"The cause will be investigated. We have no reports of injuries at this stage."

He said crews were "making steady progress" but were expected to remain at the scene throughout Friday evening.

It is the third fire in the vicinity of Heathrow this year.

In June a fire broke out at a nearby scrapyard. Smoke could be seen for miles as 110 cars burned and some departing flights were forced to switch runways.

In April nine flights were diverted to Gatwick Airport after a small fire began in Heathrow's control tower.