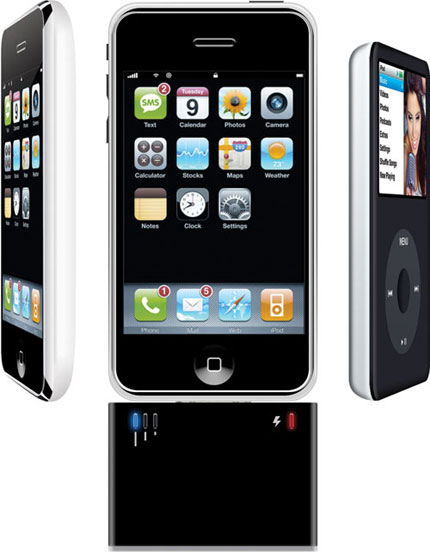 The Promise: You love how your new iPhone 3G zooms across the Web at EDGE-crushing speeds, but hate how the high-speed network drains its battery life. This backup battery claims to solve that problem: Pop it onto your iPhone's (or any iPod's) 30-pin connector and it adds "up to 30 hours of additional music, 6 hours of video, 3 hours of talk time."

In Practice: This product is more of a portable wall outlet than a second battery. Plug your iPhone into it and the phone will suck up juice as if it were plugged into the wall, essentially allowing you to charge your gadget while keeping it stowed away in a bag. You charge both the battery and your iPhone/iPod at the same time from a single outlet or USB slot. Simply plug the BackUp Battery into a powered USB slot or wall and dock it into your iPhone. Both will charge. Brilliant, and quite useful as a back-door way to charge your iPhone from a wall without an Apple AC adaptor.

When testing, we charged the Back Up Battery and then threw it on our juiceless iPhone. Within a few hours, the iPhone battery was completely full, essentially doubling the length of time we could use it on the road. The BackUp Battery was showing a red "low battery" light. It could charge the iPhone once, but not twice.

While the battery itself is a little awkward and bulky to be kept plugged in while you use the iPhone, it's small enough to fit into a pocket or side pocket on any bag without being intrusive.

Bottom Line: This is as close to a must-have accessory as exists for the iPhone 3G. While it works with the whole iPod family, it's especially useful as an iPhone 3G companion. Keeping a charged backup battery in your bag essentially doubles your iPhone's battery life, while adding very little to your total amount of carried weight. The iSound isn't the only backup battery out there: RichardSolo makes one and iPhonek's version will ship next month with a slightly lower price tag. All of them will give a much-needed bump in the iPhone's battery life so that you can use its GPS or 3G connection without worrying that you're phone won't make it through the day. —Seth Porges