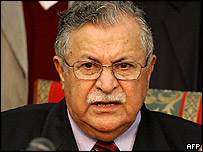 Iraqi President Jalal Talabani has dismissed as "nonsense" the charge that the country's rights abuses are as bad as they were in Saddam Hussein's era.
Former Iraqi Prime Minister Iyad Allawi made the comparison as he called for prompt action on recent torture claims.
Mr Talabani told the BBC modern abuses cannot be compared to the concentration camps and mass graves of Saddam's time.
Mr Allawi's remarks have angered the Shias and Kurds, who suffered most under Saddam, a BBC correspondent says.
Mr Allawi's remarks were published in an interview with the UK's Observer newspaper on Sunday, as Iraq gears up for parliamentary elections next month.
They are set to heat up the election debate and are likely to be well-received by the Sunni community, the BBC's Jim Muir in Baghdad adds.
Sunni leaders have repeatedly accused Iraq's new government of torturing detainees from their community, in which support for the insurgency is strongest.
Two weeks ago, some 170 detainees were found at an interior ministry centre, many allegedly suffering from abuse and starvation.
'Nonsense'
Mr Talabani, a Kurd, told the BBC everyone opposed torturing or harming detainees and there were no parallels to be drawn between the present and abuses that took place under Saddam Hussein. 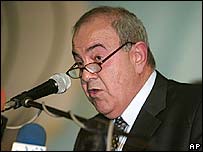 Iraq is the centrepiece of this region. If things go wrong, neither Europe nor the United States will be safe


"If you go back to Saddam's Iraq, we see that Iraq was turned by Saddam to concentration camps on the ground and mass graves underground," he said.
Mr Allawi, he said, "cannot compare this situation with that situation".
"I cannot convince myself or imagine that such nonsense has been said by Dr Allawi," Mr Talabani said, pointing out that Iraqi now enjoyed a range of democratic rights - from free expression to free elections.
Mr Talabani said at least three people had died after being tortured at the interior ministry during Mr Allawi's term as prime minister, which ended in April this year.
But, he said, that did not make Mr Allawi worse than Saddam Hussein.
'Contagious'
Mr Allawi told the Observer "people are doing the same as [in] Saddam Hussein's time and worse".

"It is an appropriate comparison. People are remembering the days of Saddam," he said.
Mr Allawi - who was displaced earlier this year by Shia factions - said Shia militias had infiltrated the police, and warned that their influence could spread throughout the government.
He also warned of the danger of Iraq disintegrating in chaos.
"Iraq is the centrepiece of this region," he said. "If things go wrong, neither Europe nor the United States will be safe."
Mr Allawi was Iraq's first interim prime minister, but he failed to win January's election which brought the current Prime Minister, Ibrahim al-Jaafari, to power. He has since formed a coalition to contest next month's parliamentary elections.