A huge fire has destroyed the historic Grand Pier at Weston-super-Mare.

Dozens of firefighters fought to tackle the blaze which took hold of the partly wooden pier in the North Somerset seaside resort at about 0700 BST.

No-one was injured in the fire, though black smoke and flames were said to be visible from as far away as Cardiff.

BBC Radio Bristol reporter Nigel Dando, who is at the scene, said: "There'll be nothing left after this fire, it's a desperately sad scene."


Dee Williams, deputy manager of the Grand Atlantic Hotel, which lies 200 yards from the pier, said: "It is an inferno. There will be no pier by tonight.

"There are loud bangs going off, which could be fireworks because there was a display on there recently. The tide is out and I think they are having difficulty getting water to it.

"My night porter spotted the flames at 7.15am. There are lots of people about, watching the fire, and the police have blocked off the road.

"The pier was bought by new owners and done up recently, it is part of our identity and would really affect trade if we were to lose it."

Jacquie Whelan, owner of Sunfold Hotel on Beach Road, said: "I just looked out of the window... when I woke up and could not believe what I was seeing.

"It is the most horrendous thing. There are massive red flames, hundreds of feet in the air, all over the pier.

"We are a five minute walk to the pier and from where I am standing it just looks like a huge bonfire. It is not going to survive."

Bruce Watson, who works at the Sovereign shopping centre opposite the Grand Pier, said: "The fire has taken complete control of the pier, they won't be able to repair it.

"It's just a shell virtually now, the flames are hundreds of feet high and the smoke into thousands of feet."

Police have placed a cordon around the pier and beach and advised people to avoid the area.

The quarter-of-a-mile-long pier, which attracts thousands of visitors a year, reopened in April after a massive revamp.

It first opened in 1904 and was later bought by the Brenner family who sold it earlier this year in a multi-million pound deal to brother and sister Michelle and Kerry Michael.

The Michael family's regeneration of the site has included a new funfair and go-kart track and there were also plans to open restaurants and offer Victorian-style shows.

Relatives of Mr Michael said he left the country yesterday for a holiday in Spain.

Speaking from his home in Bleadon, near Weston-super-Mare, a woman, who asked not to be named, said Mr Michael was aware of the situation and was likely to return home as soon as possible.

The cause of the fire is not yet clear.

Stephanie Mounsey, from Avon Fire and Rescue, said the structure, which is supported by iron girders, was not at risk of collapse.

She said fire officers were first notified of a blaze at 0645 BST.

Ms Mounsey added: "There is plenty of water on it and things look like they are getting under control.

"We believe the foundations should be safe."

Rod Brenner, who owned the pier until six months ago when he sold it to the current owners, said: "I think that what has happened is, fortunately it had a very thick hardwood floor, and I think that has held, from what I can see here.

"The entire pavillion has gone admittedly, and it'll be obviously a huge project to rebuild it, which will take a considerable amount of time.

"I mean, when it burnt down last time, in 1930, it took three years and they probably moved a bit quicker then than we do nowadays."

Christopher Donkin, manager of Seaquarium aquarium in Marine Parade, some 500 yards from the pier, was alerted to the fire by a colleague as he drove to work.

All those people's livelihoods and businesses - where will they go?
Christopher Donkin, Seaquarium

He said: "Fortunately, we're not in danger, no other properties are in any other danger.

"The fire brigade have put a wall of water along the walkway between the seafront and the end of the pier.

"Traffic this morning was absolutely chock-a-block.

"When I first saw the fire, to be honest my first thoughts were for the livelihoods of people who work here.

"It's Weston's number one attraction. It's full of childhood memories.

"All those people's livelihoods and businesses - where will they go?"

Tory MP for Weston-super-Mare John Penrose said he was "shocked and dismayed" by the scenes at the Grand Pier.

"The Grand Pier is one of the icons of Weston's seafront," he said.

"Anybody who has ever visited the town or lives here permanently has probably strolled along the boardwalk, eating candyfloss, to play on the amusements at the far end.

"Kerry and Michelle Michael have been investing huge amounts of their own time and money into regenerating the pier. This is a tragedy for the town as a whole and for them in particular.

"The only piece of good news is that there are no reports of casualties. At least there is something to be thankful for."

slowly one by one these pier's are all going up in flames, they will be nothing left of our Heritage.

Napster said:
slowly one by one these pier's are all going up in flames, they will be nothing left of our Heritage.
Click to expand...


It does seem to be every so often there is a major fire which distroys them....shame really.

One hell of a fire too. 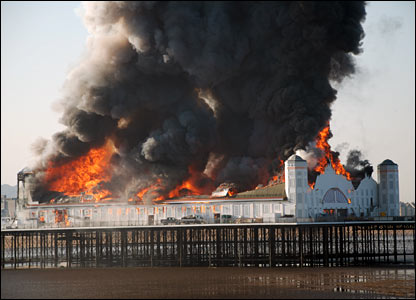 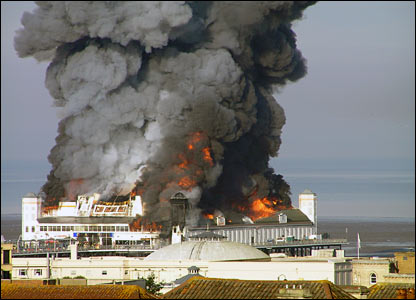 I was in Weston a few years back and have walked round that pier. It's a real shame to see it destroyed by fire.

Mind you I can't remember much else about that holiday. Too much Scrumpy Jack.

i have been there a few times, dont live to far from it.

Its a real shame, i remember my misses was in real back spinal pain because she was pregnant and the baby was turned, took her there and the pain had gone

lets hope the pier isnt to damaged and they decide to rebuild.