Three Romanian fraudsters have been jailed for conning eBay customers out of £300,000. How did they do it? And how can eBay's bidders avoid it happening to them?
Nicolae Cretanu, 30, his 23-year-old wife, Adriana, and George Titar were carrying on the world's oldest fraud tradition: Taking payments for goods they never intended to deliver. 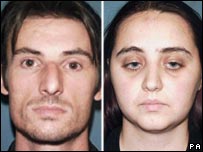 Mr and Mrs Cretanu would place adverts on eBay for everything from cars to concert tickets. Some of these items were genuine, others were imaginary.
The couple would then wait until the end of the auction, when they would contact unsuccessful bidders and offer them a "second chance" to buy the goods.
Every eBay customer can be contacted through the site and their e-mail addresses are often freely available. But the website stresses that this is the point at which the transactions move out of what it calls the "protected environment".
"The criminals used the site to gather information and initially to contact their victims but carried out the fraud separately, beyond the protected environment we provide," an eBay spokesman says.
Fake passports 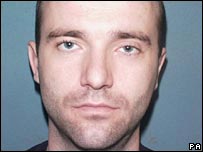 The victims were urged to wire cash as quickly as possible to England, using Western Union money transfer, to be in with a chance of receiving the goods.
Using a series of fake passports and identities, the fraudsters would collect the cash from Western Union's outlets.
George Titar would collect the cash
Western Union says its money transfer services are not intended for use on websites such as eBay. It warns that their customers should never send money to people they do not know personally.
Despite jailing the three Romanians, police warn that their criminal network - and their scam - is still very much alive.
So how can eBay's customers avoid being ripped off? Gareth Griffith, the website's head of security, urged bidders not to lose their common sense.
"You have the same responsibility you have when you're walking down the road and some guy tries to offer you a lap-top [computer].
"He says 'give me the money now and I'll go get it, I promise you'. Well, you wouldn't do that."
Bidders should always be wary of direct contact from sellers offering to sell "off-eBay" and of anyone asking for payment through money transfer, the site's spokesman advised.
eBay also said that payments through Western Union are now banned on their US sister site, eBay.com, and a similar move is expected from eBay.co.uk.
You must log in or register to reply here.
Share:
Facebook Twitter Reddit Pinterest Tumblr WhatsApp Email Share Link
TEST
Top