World number one Justine Henin has announced her retirement from tennis with immediate effect.

The 25-year-old insists her decision is final after confirming the shock news in her native Belgium on Wednesday.

"It's the end of a wonderful adventure but it's something I have been thinking about for a long time," said the winner of seven Grand Slam singles titles.

Henin headed the WTA rankings for the 117th time this week, but pulled out of the Rome Masters blaming fatigue.

The Belgian has been enduring one of the worst slumps of her career this season, losing four times in the past four months.

She suffered a shock defeat by Russia's Dinara Safina in the third round of the German Open last week in only her second match after a month off with a knee injury, losing 5-7 6-3 6-1.

The news comes less than two weeks before the start of the French Open, which Henin has won four times, including each of the past three years.

"I'm at the end of the road," confirmed the winner of 41 WTA singles titles, after the Belgian press leaked stories of her imminent retirement on Wednesday morning.

"This is the end of a child's dream."

"I have experienced everything I could have. I have lived completely for tennis.

"I am relieved and proud of what I achieved."

Henin also insists that, unlike many other sports stars who have retired at an early age, she will not change her mind.

"A new future is ahead and I won't go back on this decision," she added.

"It's a bolt out of the blue. Nobody in the world of tennis saw this coming," he said.

"You have to remember this is her favourite time of year with the French Open beginning next week.

"She's undefeated in that Grand Slam event since 2004, so to retire now is quite jolting and will make people wonder about the true reasons."

Speaking in Berlin just before the German Open, Henin revealed that she had been thinking hard about life beyond her career in professional tennis.

"I'm young in life, but starting to get old on the tour," she said. "I'm growing up and I need different things.

"Even physically I don't recover as well as I did when I was 20. That's normal.

"Now I've been playing tennis for 20 years and it's been my whole life but as a woman, as you get older, you need to think about the future."

Henin retires on top of the WTA singles rankings ahead of second-placed Maria Sharapova by some distance. 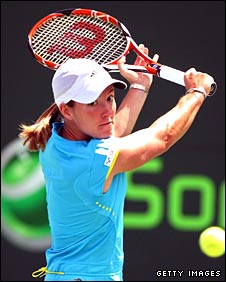