Gun T-shirt 'was a security risk'

A man wearing a T-shirt depicting a cartoon character holding a gun was stopped from boarding a flight by the security at Heathrow's Terminal 5.

Brad Jayakody, from Bayswater, central London, said he was "stumped" at the objection to his Transformers T-shirt.

Mr Jayakody said he had to change before boarding as security officers objected to the gun, held by the cartoon character.

Airport operator BAA said it was investigating the incident.

Mr Jayakody said the incident happened a few weeks ago, when he was challenged by an official during a pre-flight security check. 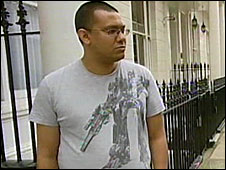 Brad Jayakody changed his T-shirt before boarding the flight​

"He says, 'we won't be able to let you through because your T-shirt has got a gun on it'," Mr Jayakody said.

"[The official's] supervisor comes over and goes 'sorry we can't let you through and you've a gun on your T-shirt'," he said.

Mr Jayakody said he had to strip and change his T-shirt there before he was allowed to board his flight.

"I was just looking for someone with a bit of common sense," he said.

It's a cartoon robot what threat is it to security or offensive to anyone at all."

A BAA spokesman said there was no record of the incident and no "formal complaint" had been made.

"If a T-shirt had a rude word or a bomb on it, for example, a passenger may be asked to remove it," he said.

"We are investigating what happened to see if it came under this category.

"If it's offensive, we don't want other passengers upset."

read this in the paper this mornin,nearly choked on my 3 sausage 2 egg beans tomato fried bread and pot of tea

Should get one that says on the back. "Does my bomb look big in this?"
M

zerofool2005 said:
Should get one that says on the back. "Does my bomb look big in this?"
Click to expand...