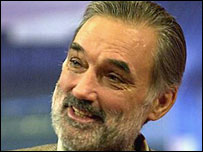 Football legend George Best has died in hospital at the age of 59.
The ex-Manchester United and Northern Ireland star had multiple organ failure after a lung infection he developed last week led to internal bleeding.

Doctors on Friday had said Best was unlikely to survive the day and all they could do was make him comfortable.

He had been in west London's Cromwell Hospital since being admitted with flu-like symptoms on 1 October, later suffering a kidney infection.

Best, a recovering alcoholic, needed drugs after a 2002 liver transplant that made him susceptible to infection.

The Belfast-born former footballer and television pundit had been prescribed medication to suppress the immune system and prevent his body rejecting the new liver.

Decline of the golden boy

At the time of his hospital admission in October, Best's agent Phil Hughes said his client had been "off the drink" before being admitted to the hospital.

Best is widely regarded as one of the greatest players to have graced the British and world game.

His heyday occurred during the 1960s, and he brought a pop star image to the game for the first time.

But the accompanying champagne and playboy lifestyle degenerated into alcoholism, bankruptcy, a prison sentence for drink-driving and, eventually, his controversial liver transplant.

He helped Manchester United win the First Division title in 1965 and 1967 and the European Cup in 1968. His role in the team's success was recognised by his becoming the European Footballer of the Year in 1968.

Best made 466 appearances for the Old Trafford club, scoring a total of 178 goals.

Location
None Of Your Fu**in Business

Gone but not forgotten

Location
When i get there i'll let you know

the man was a football great

your a football legend and will be remembered for that!

Echo the sentiments, the guy was a football god without a doubt.

Never been a real footie fan, but I can remember watching him on tellie (in black & white too..) in the late sixties and being totally gobsmacked at his talent, he left everybody else in the dark.

Sad time for everyone... but he will be coming home to Belfast... Let's hope Belfast City Council create some sort of memorial to the legend himself...