Geordies are top of the grumps in the misery league

They say it's grim up North. Just ask the Geordies.

Those living in Newcastle upon Tyne are the most miserable people in the country and need considerable encouragement to cheer up, a survey has found.

Nearly half are unhappy about their financial situation and a third are demoralised by work.

Coming home after a hard day's slog often doesn't help either as just over a fifth aren't too keen on their other halves.

Popping out for a pint with friends can be hitand-miss as well, with a quarter of Geordies dissatisfied with their social lives.

Bristol, on the other hand, was the happiest place to live, with a third of residents extremely happy with their lives, according to the survey of 2,000 Britons carried out by cake manufacturer Mr Kipling.

A similar number were blissful in their relationships and a quarter completely content with family life.

More than one in ten Bristolians even claimed to be totally satisfied with work.

Wolverhampton was next happiest, with York, Plymouth and Sheffield finishing off the top five smiliest populations.

Overall, almost half of all Britons were happy with life in general and just 6 per cent completely unhappy. 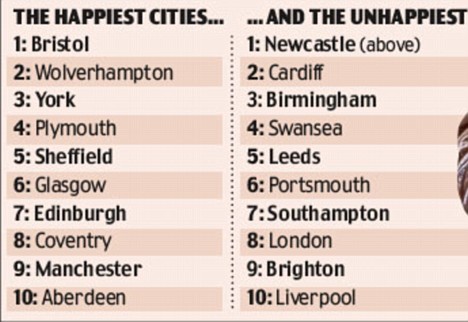 However, just 29 per cent were satisfied with their financial situation, adding to evidence that the credit crunch is starting to bite.

But it is the little things in life that can really keep us smiling.

Receiving a sweet message from a loved one was rated the best cheermeup, followed by sliding into a bed with freshly-warmed sheets, waking up on a sunny day and having a quiet moment to yourself.

Other favourites included being praised by the boss and having a cold beer after work.

The undisputed happiest moment of the week, wherever you live, is

4.59pm on a Friday as thoughts turn to two days of freedom.

'Bristol is obviously the place to head to enliven your spirits,' said a Mr Kipling spokesman.

'It's home to a lively city centre and is surrounded by beautiful countryside. It is also close to the beach. It's surprising to see that Newcastle folk are the unhappiest in the UK as they are renowned for being happy-go-lucky and enjoying life to the full. But unemployment rates in the North-East of England are rising and Northern Rock, which has its headquarters in the city, has had a particularly bad year.'

A spokesman for Newcastle city council was less than impressed with the findings. 'The people of Newcastle are as happy as people anywhere else,' he insisted. 'A Europe-wide survey last year indicated Newcastle as the third-best place to live.'

I would hazzard a guess that the people compiling these lists never actually visited these cities.

Edinburgh is a very depressing city, outside of the festival months it is very hard to find anyone with something nice to say. Same goes for Bristol too, whenever I have been there I have been greeted with a tidal wave of gloom.