Family guilty of 'honour killing'
Arash Ghorbani-Zarin was stabbed 46 times
A father and his two sons have been found guilty of murdering his daughter's boyfriend in an "honour killing" after she became pregnant.
Arash Ghorbani-Zarin, 19, was found stabbed 46 times in a car in Rosehill, Oxford, on 20 November last year.
The Iranian Muslim had been studying at Oxford Brookes University.
Chomir Ali, 44, was found guilty of ordering sons Mohammed Mujibar Rahman, 19, and Mamnoor Rahman, 16, to kill Mr Ghorbani-Zarin, at Oxford Crown Court.
We miss him every second, every minute and every hour of every day. His death has crushed our family
Family of Arash Ghorbani-Zarin
During the trial, the court heard the two sons killed Mr Ghorbani-Zarin due to the "shame and dishonour" brought on the family by his relationship with Manna Begum.
The pair met in 2003 through school friends, who described them as devoted to each other, with Miss Begum becoming pregnant in August 2004.
But Miss Begum's father, a Bangladeshi-born waiter, had planned for her to have an arranged marriage.
Her brother, Mujibar Rahman, was also furious at his sister's "blatant" defiance and had previously slapped her for refusing to end the relationship.
'Intelligent and loving'
After the killing, the DNA of Mamnoor Rahman was found on a knife.
The Rahman brothers' blood-stained clothing was also found in a plastic bag, which street sweepers saw being thrown into an Oxford allotment by their father, three days after the murder.
In summing up the trial, which lasted four weeks, Mr Justice Gross said the Western-style relationship caused a "battle of wills" in Miss Begum's family, as she resisted pressure to conform.
The defendants were convicted of murder at Oxford Crown Court
The jury took four-and-a-half days to reach a decision and there were loud cheers in the court as the verdicts were read out.
Mr Justice Gross adjourned sentencing of all three defendants, while pre-sentence reports on the youngest defendant were prepared.
Following the verdicts, Mr Ghorbani-Zarin's family said in a statement: "Our son was intelligent and loving and had a wonderful lifetime ahead of him.
"We miss him every second, every minute and every hour of every day. His death has crushed our family."
Det Ch Insp Steve Tolmie, of Thames Valley Police, said the murder was "a horrific, violent attack on an innocent young man with a lot to live for.
"No-one has the right to take away someone's life for whatever reason and people who choose to do this will be punished, as shown today."
Victim: 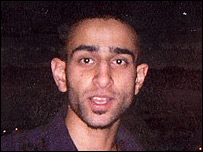 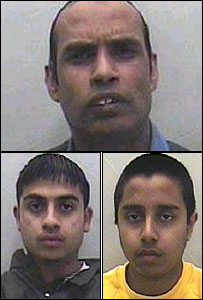