A huge operation will take place tonight to disarm a German bomb that threatens up to two square kilometres of east London.

The 2,000lb device, believed to contain 1,000lb of high explosives, has been encased in a sand and wood 'igloo' to absorb any blast if it goes off.

Tonight Royal Engineers plan to cut through the metal casing of the 60-year-old device, which measures five foot by two foot. They will 'steam' the explosive so it becomes a safe liquid. 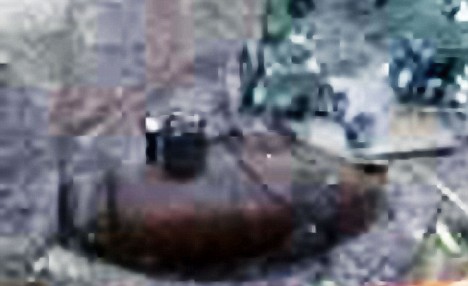 Potentially deadly: Soldiers will disarm the German bomb, which dates back to the Second World War, tonight

The Second World War bomb was dredged from the banks of the Lea near Three Mills Island in Bromley-by-Bow near the 2012 Olympics site.

Disposal experts have already disabled its fuse after it began to tick. At one point they asked police to consider evacuating up to 1.7 square kilometres - an area which includes thousands of people, schools and key parts of the rail and Underground network.

Bomb disposal officer Captain Si Oates was sent back to the device to deal with its fuse. He poured a salt solution on to it to 'freeze it' and then deployed a powerful magnet in case a timer had also been set off.

'This would have been an enormous blast with a devastating impact on the surrounding area from the point of impact. We are talking about a ton of explosive here,' a military source said.
​ 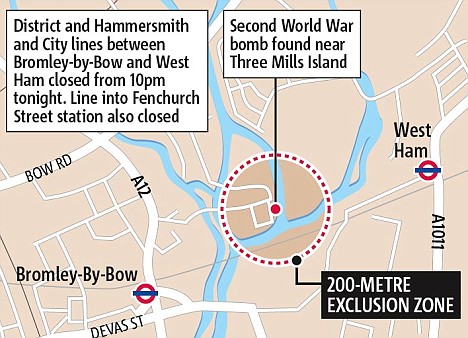 ​
A map shows the area in east London where the Blitz bomb lies
​
A 200-metre exclusion zone is now in effect around it the device.

The plan to make the nine foot-long bomb safe will bring travel chaos from 10pm tonight as nearby Tube and rail lines are closed to avoid passengers being put in danger. Local bus services will be cancelled or diverted.

Commuters have been advised to make alternative travel plans until the bomb, which was discovered on Monday, is moved.

Police said around six residents in the area were evacuated as well as a number of businesses in the 200-metre exclusion zone.

Borough Commander Simon O'Brien said: 'It has been an interesting few days for us, which has been happening in the background while London eats and sleeps. Our Royal Engineer colleagues have been extremely brave.

'The military originally wanted a kilometre and half exclusion zone and that give you an idea of the area that could have been affected.'

Well its gonna be fuin getting home for me in the morning. Am on a night shift in the city and it is my C2C line that runs alongside it. Fingers crossed it will be resolved or I'm gonna be sleeping in Fenchurch street in the morning.

Them bomb disposal boys have balls the size of watermelons !!! "respect":emotions1
P

Two kilometres?
For a World War II bomb?
I don't think so!

The diagram shows 200 metres, by the way.

The diagram shows 200 metres, by the way.
Click to expand...

1000lbs of explosive could well spread debris over 2km - 60 years old or not its still a bloody big bomb!!!!

Thats right mate, there not on about actual "blast radius" but shock wave damage from the amount of explosive that is in this baby would cause damage that far our. Blast debris could also fly that far out..!

The 200 meter exclusion is the 100%-50% Death zone from my little memory of the subject, this area is effectively the "kill zone" of the device.

I wouldnt want to be anywhere near that regardless of if it were safe or not, ive been to war zones on active service and these things cause massive destruction.

Cast your minds back to when the US and the UK were trying to flush the talliban from afganistan using the bunker busting 1000lb bombs ? remember the blast on tv from them ? well this would be of at least that strength if not 1.5 times it... It wouldnt be as powerful as 2x as much due to the grade of explosives they had in WW2 and today.. ours are much more powerful. 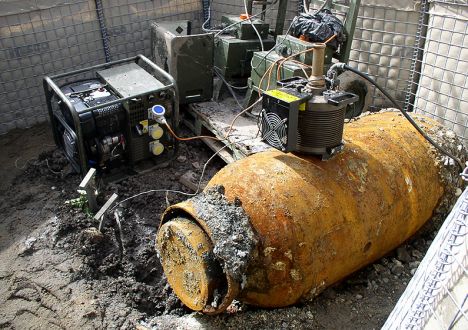 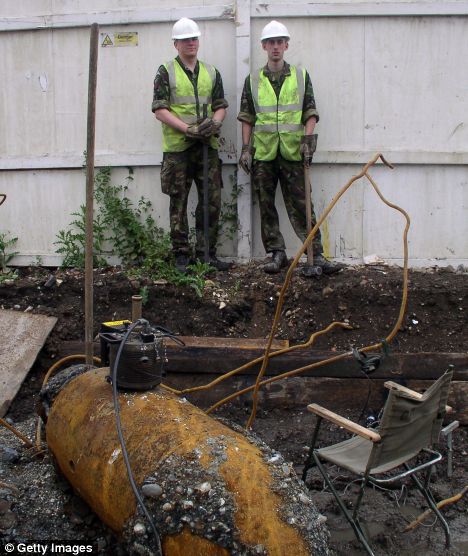 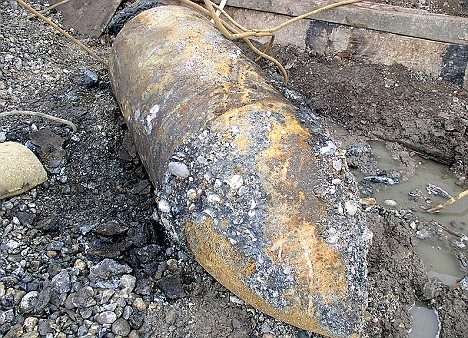